Why Does The World’s Largest Tech Business Send So Much Direct Mail (And Does It Actually Work?) 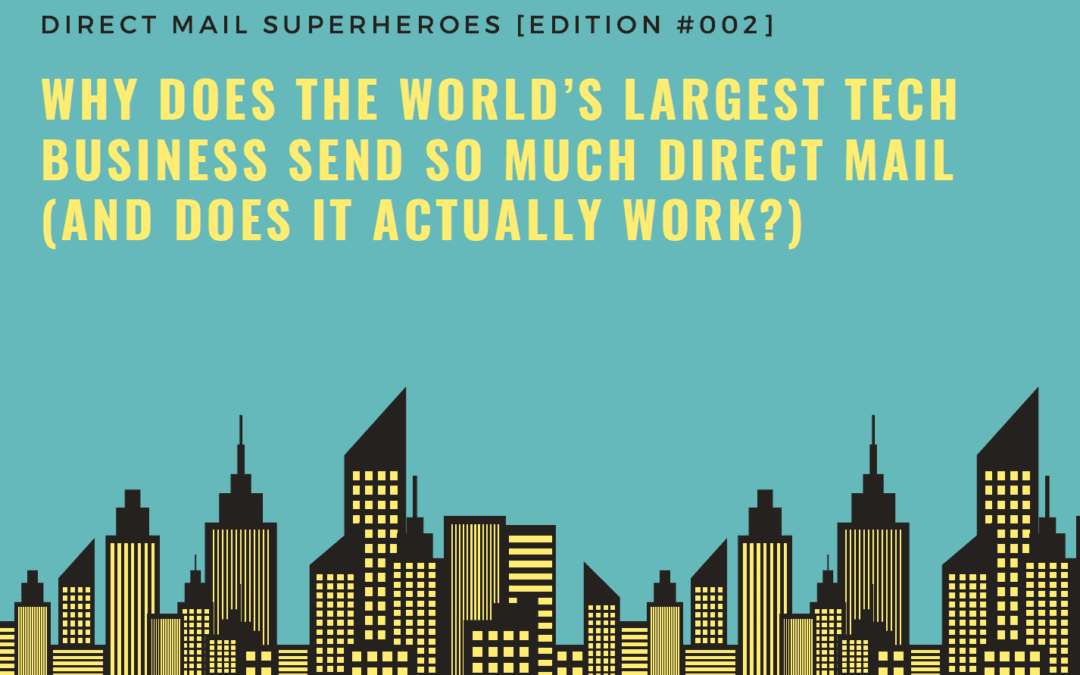 Almost as ironic as the Bible being the most stolen book in the world (yup, it’s true. Google said so).

Google have the biggest (and most powerful) advertising platform in the world and they’re ranked first amongst the worldwide internet companies with a market capitalization of 373 billion dollars.

They literally have the power to put a message in front of anybody, anywhere based on an unbelievably intelligent data.

So why the hell do they send so much direct mail?!

In this week’s ‘Direct Mail Superheroes’ – we’re going to explore WHAT they send, WHY they send it and the big lessons that any business, brand or organisation can learn from them.

But let’s start at the top.

What Direct Mail Do Google Send?

Well, they have two different forms of campaign.

Firstly, they have their lead-generation campaigns.

These are simple mailers that include a $100 or £75 voucher (depending on your side of the pond) that aim to incentivize newbie advertisers to try their advertising product.

The mailer gives them a credit when they make a small spend, to give them a taste of their advertising platform and to encourage them to spend.

It includes a simple explainer letter, giving them an intriguing benefit-focussed headline.

It then includes a physical voucher that gives the outside envelope a lumpy feel that mimics a credit card or store voucher (increasing intriguing to drive a better open-rate). 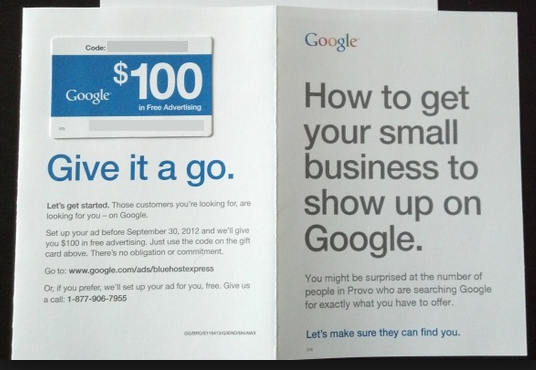 The second type of campaign that they send is to their larger spending advertising accounts.

These are typically larger companies or agencies that manage a combined ad spend.

Google’s aim with these campaigns is to help them to increase their advertisers spend, and for the simple fact that each of these recipients is worth much more to Google, it gives them license to invest more in building a memorable campaign.

One that jumps to mind is a campaign they sent a couple of Christmas’s ago.

They ran a lumpy mail campaign where the envelope was too big to fit through a letterbox, it contained an advent calendar with a digital insight about UK internet use being behind each door as well as a chocolate, as well as incentivizing the recipients to increase their spend.

Each of these had cost a much larger amount to send, but given the value of each customer receiving one and the impact of just a small percentage performing on overall revenue, it was a no-brainer to send something that “wowed” them.

But the big question that remains is …

Why Do Google Send Direct Mail?

The most powerful tech company would surely use their own advertising platform to attract new users, right?

But let’s take a closer look.

Because Google know better than anybody:

They know that in order to compete online, they need to battle their own customers to complete for attention in areas where their users are already being bombarded.

Yet as the latest Royal Mail Market Report suggests, 58% of people say that direct mail makes them consider – or reconsider – their current perceptions about the brand or product and its relevance to them. Sometimes it inspired them to think about using them/buying from them.

Although direct mail might not be as cool and shiny as a chat-bot or some online gimmick – the data proves that it leaves a longer-lasting impression.

So, What Lessons Can We Learn?

There are three key lessons we can learn from Google.

The first is how critical direct mail is to any marketing mix.

For a company that owns the world’s most powerful advertising platform to be using direct mail is the most proof that you could ever need that you should probably be looking at direct mail also.

Something tells me they know what they’re doing.

Their lead-generation campaigns are low-cost simple campaigns that are heavily focussed on the conversion-rate and revenue.

Yet their large spend/agency campaigns are much more focussed on delighting their current customers, offering them support and letting them know that they’re appreciated.

The third lesson is that they have fun with their mailings.

Google are a pretty serious business, they don’t particularly have a strong voice or personality. Yet when it comes to their direct mail to their current customers, they send advent calendars, bulky envelopes and inject fun into their mailings.

If somebody as serious and dry as Google can show their fun side to benefit their customers, then any business anywhere can do the same.