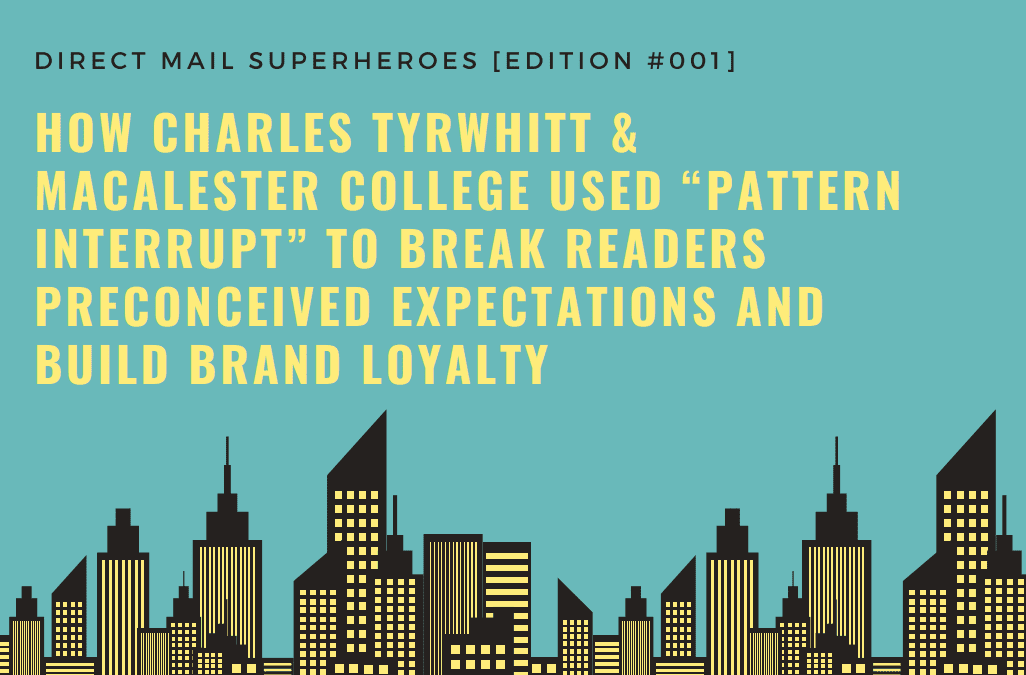 You’ve changed a lot since you left University.

You probably don’t go out on all weekend benders? Drink Sambuca like water and survive on microwavable curries.

But you’re likely still carrying one trait that you picked up from university.

That is the way that you write.

The education system brainwashed us into writing in a very specific way – they wanted us to write proper English, impress the examiner with dull data-based content spread over thousands of words and speak in a tone that is so dull that it can only be heard by dogs.

So, when we’re tasked with creating marketing pieces – we often write them like we’ve been taught, resulting in dry and boring mailings that the recipient doesn’t want to read.

In this week’s ‘Direct Mail Superheroes’ – I want to talk about brands that have used something called “pattern interrupt” by using humour, breaking expectations and ensuring their mailings are read, enjoyed and responded to.

Because when we receive a piece of direct mail or any marketing piece for that matter, based on who it has been sent from, we have a belief and expectation of what is going to be said and how it’s going to be said.

But when that mould is broken, it causes the reader to double-take, engage and read your mailing.

A great example of this was recently sent by Macalester College, based in Minnesota.

Let me ask you a question …

When you requested an information pack from a University/College, what do you expect the accompanying letter to say?

Macalester College understood this and used a “Pattern Interrupt” brilliantly.

Here’s the opening few paragraphs of their letter.

This breaks the expectation of the recipient, it taps into the conversation in the recipients mind (that these letters are typically full of rubbish) and it speaks in first person, directly to the reader.

Another example was sent by Charles Tyrwhitt.

What do you expect when you receive a mailing from a clothing company?

Well, most talk about their fabrics, write to you like they’re writing to royalty and are as dry as dust.

But Charles Tyrwhitt used a “pattern interrupt” to be the opposite of what was expected, and spoke to the reader in first person by using humour.

Take a look at this:

Did more people read this letter than a letter that was written like a university assignment?

Of course. People engaged with it, it made them love the brand even more and no doubt, it resulted in more people using the voucher referenced in the letter.

Bringing personality to your mailings and using a “pattern interrupt” to be different to what the recipient is expecting is a powerful way to increase the response of your campaign whilst making the customer/prospect feel much more warmth towards you.

They relate to you and they feel like you’re on their side of the fence.

For your next mailing, consider how you can break the mould and tap into the preconceived expectation of what the reader has for your mailing.